Last week I wrote a blog called Happiness is….
Go check it out if you haven’t already.
…go ahead, I’ll wait.

It’s all about recognizing and holding on to true happiness when you find it.
If you have depression or fears or doubts about who you are and what you want out of life, I’d say it’s a fairly important subject. And, if I may toot my own horn, an entertaining read. Toot Toot.

But for some reason, I got sidetracked talking about hamsters and now I have like a dozen hamster fans following me on Instagram.
Which is cool…I mean, who doesn’t like hamsters?
But, this is a blog about recovery…not rodents. And it’s not likely to be a subject I cover often. or at all. I mean, after this one.

But hey, I’m not complaining. Maybe there’s someone out there that’s really depressed or riddled with anxiety. Lets say they read one of my posts and than decided to scroll through my Instagram connections. They stumble upon a picture of a cute furry little apple-cheeked hamster and it brings them some level of contentment. Maybe they go out that day and decide to take a chance on love. Maybe they find their soul mate. Maybe they live happily ever after and it’s all because of me.
Serendipity? Cosmic connection? Hamster happenstance? Who can say?
Stranger things have happened….oh and …excuse me for a second….*note to self* – finish Season 2 of Stranger Things.
• Will Dustin end up with Mad Max?
• Will Hopper ever settle down?
• Why don’t these people just move the fuck out of Hawkins?

Look, I know people who moved because they didn’t like their neighbors.
Beaumont, Texas had a HUGE exodus of people in the late 50’s/early 60’s because the paper factory just outside the city polluted the air so drastically, people couldn’t tolerate the smell.
Can you imagine living in a town where a huge ominous laboratory is churning out monsters? Every week, another mucous-covered nightmare with a vagina tulip face comes running out of the woods and eats whatever Barb just happens to be standing around.
Uh, yea…that goes directly in the nope file.
In fact, this would be me…

Hey Joyce…your kid has been attacked TWICE…maybe sell your quaint little cabin in the woods and get a job at some other Five and Dime.

…..yea I said Five and Dime….go look it up…fucking millennials.

Oh also, just as an FYI, the series was originally known as Montauk, because they had started creating the show and setting the story in the real-life coastal town of Montauk, New York. I bring that up for a couple of reasons.
First, I’m from New York and live about an hour away from Montauk. In fact I used to go there all the time as a kid. So, you know, bully for me.
Also, I’m currently reading Jaws,

and the town of Amity, where the story takes place, is supposed to be Montauk…sort of.
Not actually Montauk but a Montauk-esque town. The book takes place on the South Fork of Long Island and calls out specific towns like East Hampton and Sag Harbor by name.

And lastly, this would have been really cool because Montauk is home to some truly wacky home grown conspiracies. Some complete bullshit, like the what-is-it mystery of the Montauk Monster.

To the genuinely bizarre stories of nazis, time travel and the Montauk Project at Camp Hero.

I swear I googled “Camp Hero” and this image showed up.
Here….read this… http://weekinweird.com/2015/05/21/camp-hero-americas-weirdest-state-park-is-haunted-by-strange-creatures-and-psychic-spy-experiments/

Good stuff…but I’m getting side tracked again and now I’ll likely have a bunch of time traveling raccoon surfers following me on Instagram…to which I say, Welcome.

The point of this post is to call out the future for being a goddamn liar.
And no, this isn’t about how we were all promised anti-gravity moon boots or flying cars or sex robots that don’t secretly judge us.
This is about something much simpler and in my opinion, much more important.
That’s right, I’m talking about Panda Bear Hamsters.

Now, I know what you’re thinking, “But Vee, we already have Panda Bear Hamsters. Look, here’s a video showing a sleepy-eyed future cult leader manhandling his Panda Bear Hamster. Presumably right before he hits it with his math book.”

Sure you can watch this, along with other videos…find pictures on Google Images…call your local pet store…but there is no such thing as a Panda Bear hamster.
Nope. Not a thing.

Right up there with the Bermuda Triangle and non-sexual “Cuddle Parties”.

In fact, even though there are many different species and subspecies of hamster, there’s only 5 – count em’ 5 that are widely kept in captivity as pets. The Syrian, Dwarf Campbells Russian, Dwarf Winter White Russian, Chinese and Roborovski.

Sure you’ve got your Ciscaucasian, your Mongolian, your Eversmann’s…hell even your Lesser Longtailed. But there ain’t no such thing as a Panda Bear hamster.

And why is this such a big deal?
Why am I getting all raged in the britches?
Why? You wanna know why?
I’ll tell you why…..because we were promised there would be.
We were promised and you never break a promise to a kid.
Especially one that loves hamsters.

…or ones that don’t beat them to death with blunt objects and film it.
Maybe someone should keep tabs on that kid. Ya know, just as a precaution.

I’ll bet you didn’t even know that you were promised a Panda Bear Hamster, did you?
Well, you were. And let me ask you something….did you ever get yours?
I’ll bet you didn’t.
Neither did I.
And I’m still pissed about it. Really really pissed.

Ok, let me see if I can calmly explain all of this…
Hand on….gotta compose myself a bit here…..breathe….in…..out…..in…..out…….iiiiiiiiinnnnnn…..ouuuuuuuuuuut….Zen, Vee….bring in the zen….

Alright, see if you can follow along.
There’s a company called Living World that’s been around since 1972 ( same year I was born). They sell all sorts of bird, cat, dog, rabbit, hamster, gerbil products.
Some are normal everyday things like pine shavings and travel cages.
And other things border on comically ridiculous, like the hamster hotrod.

Or whatever this is supposed to be… 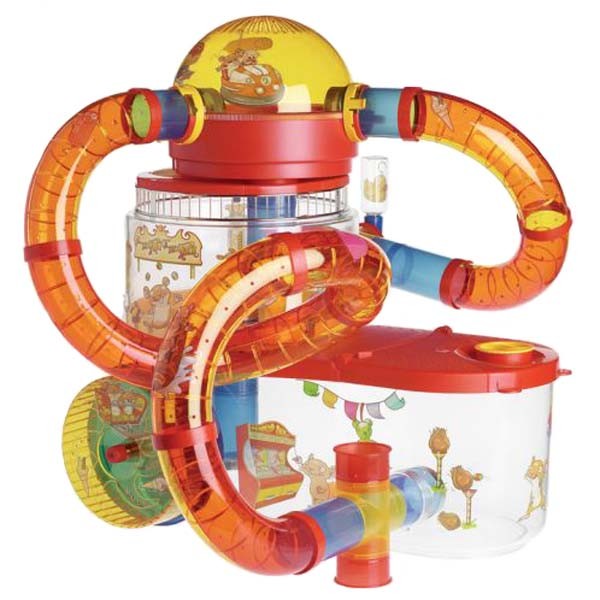 Look, I don’t know what a hamster’s natural habitat is or where you find them out in the wild, but whatever and wherever it is, I’m pretty sure it doesn’t look like a coke-fueled Mr Magorium’s Wonder Emporium. I don’t think there are any hamsters that are obsessed with extreme sports, but I can damn well guarantee you, they aren’t actively seeking out water slides and loop-the-loops.

But the most egregious offense Living World ever committed was building up a young boys hopes and dreams only to pop them like a balloon.
A balloon filled with smaller balloons that also popped.
And then pull that boys pants down in front of the cute girl he likes.
And then point and laugh.
And then get all the other kids to laugh.
And even though your mom says everything will be alright and the other kids are just jealous, you know it won’t be and you know they aren’t.
Something is definitely wrong, but she won’t tell you what it is.

Look at that picture.
Look at it real close. Do you see it?
Here, let me show you a close up.

A PANDA BEAR HAMSTER!!!!
A hamster that looks exactly like a little fucking panda!!
How awesome is that?
Don’t tell me that nearly every problem you have wouldn’t immediately be cured with a  tiny little panda. That thing is better than a happy ending Xanax massage.
And not only that, the text underneath it clearly says, “Panda Bear” Hamster Currently Not Available. See Inside For Details. So it’s not like this was just some artist with a panda boner having a laugh. They were actively marketing its arrival.

Well, this particular packaging came out in the mid 80’s.
It’s 2017. So far, no Panda Bear Hamsters. None that I’ve seen.

And yet, no movement has been made in the field of hamster advancements.
None. Zero. The hamsters you buy today are the same hamsters I bought back in the 70’s and 80’s.

But no. Hamsters are still hamsters and that’s that.
Even dogs got an upgrade.
Back in the 80’s, we had two kids of dogs.
Pure breeds and and mutts. Everything fell into those two categories.
Now dogs come in all manner of absurdity.
Poodles, Doodles, Froodles…Pekingese, Havanese, Bichon Frise.

Getting a dog is like ordering off a French menu in a Greek restaurant in Germany.

Listen, I’m a simple guy.
I have simple wants and and desires.
I want to live a happy yet modest life.
I don’t need much. Small house. Fenced in yard. Nice garden. Garage filled with motorcycles and a hamster that looks like a little fucking panda.
I don’t think I’m asking a lot.
Especially when I was specifically promised this would happen.

I didn’t ask someone to make this happen. I wasn’t standing around stomping my feet demanding geneticists to go ahead and fuck with God’s good work.
No. I was sitting there, minding my own business, when Living World tapped me on the shoulder and said, “Hey kid, how would you like one of these”.

But here I am, 32 years later, and what have I got to show for it?
Nothing. That’s what.
I’ve got my computer, my coffee maker, some unexplainable stain on my sheets, an apartment that doesn’t even allow pets and a head full of gibberish.

I blame you Living World.
This is all your fault.

View all posts by yourvitaminvee 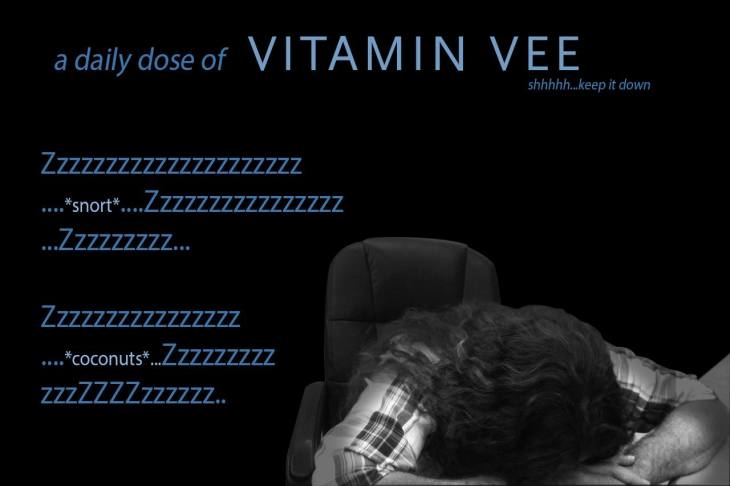 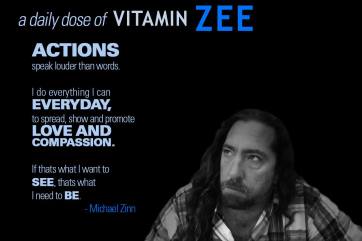 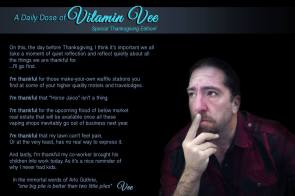 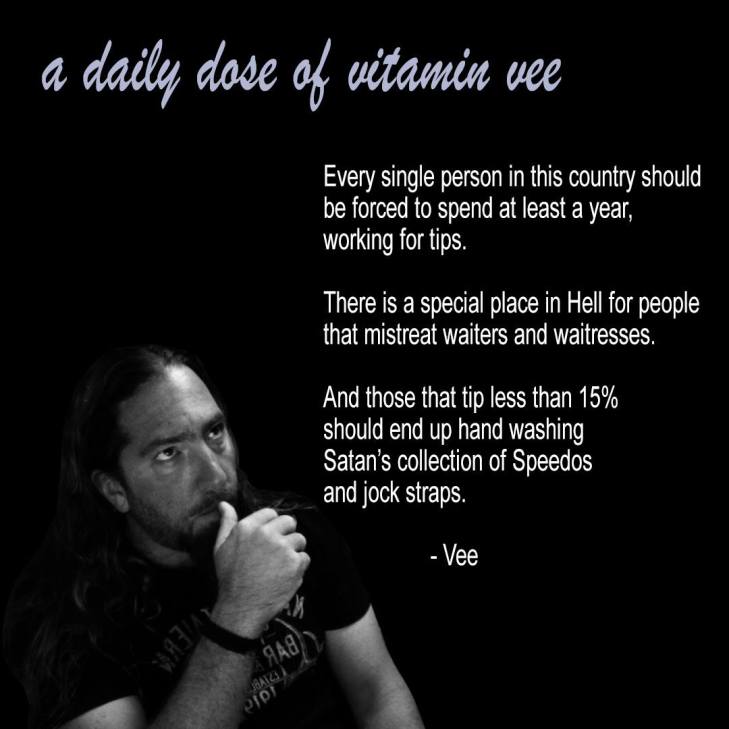 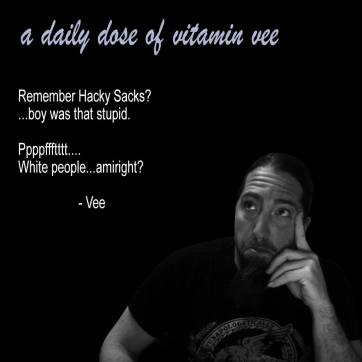 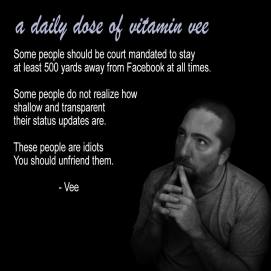 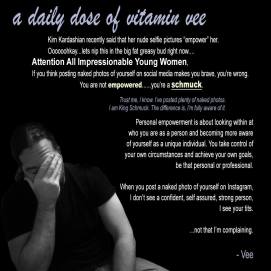 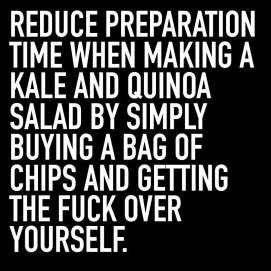